skip to main | skip to sidebar

Oh Reuben. How I love thee.

With you, man has mastered the sandwich. You make the turkey club cower for mercy. The patty melt averts its eyes. Even the mighty monte cristo walks away in shame.

I will find you, Reuben, where you most expect me to: any fine establishment, or shithole, at which you are prepared. The best amongst you will be documented here, for all to share in your majesty.

Let those who have gone before me lead the way. And I, Reuben R. Reuben, will share tales of your glory.

It was inevitable. Eventually, I, RRR, was bound to attempt Reubenology with my own stubby Jewish fingers. Fate brought me to the home of Reubenite Hutch, an Irishman, in the week of St. Patrick's Day festivities, in a house laden with leftover, freshly prepared corned beef. Our mission became clear. 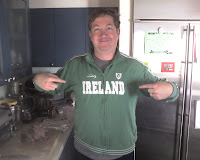 Some things are fait acccompli. You put a Jew and an Irishman in a room together, and eventually, you have a Reuben. If we had a homosexual with us, we would have ended up with a Broadway musical.

There is deep symbiosis amongst our people, as the corned beef bonds run deep. Look it up here. Me and Reubenite Hutch's theoretical ancestors once bonded as we were. 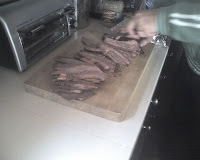 As I watched him slice much goodness, we ran down the list of necessary ingredients. Rye, check. Kraut, check. Swiss, check. But Reubenite Hutch had mistakenly bought Country French dressing. Preposterous. I beat him several times about the face and neck, then hit the grocery store to get 1000 Island.

An aside here. Reubenite Hutch dared me to wear his daughter's clip-on earrings to the store. I did. Thankfully, no pictures exist. This being Los Angeles, I went virtually unnoticed and un-commented upon. There was an old man in a Red Sox hat checking out at Register 4, and I will forever regret not starting a conversation with him about Josh Beckett, then enjoying his double take. 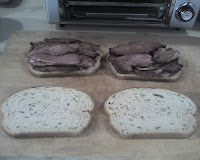 The corned beef was sliced thickly, and then strewn across the bread with much love.
This is one of the essential differences between the home Reuben and any other; the lack of an industrial slicer. Instead of bunched and folded thin slices, you get manly hunks, requiring incisor control. If you're not up to it, consult an orthodontist. 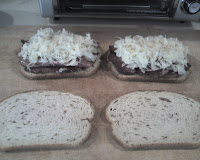 Replicating a lesson learned at Canter's, we drained our Kraut thoroughly. A much less messy sammy than a leaking Kraut would have wrought. Insert your own Dirk Nowitzki joke here. 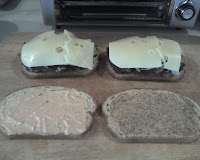 The Swiss was hand-torn and shapen to fit the sammy...went with just single slice thickness here in mach 1.
1000 Island lovingly slathered on the left, Hutch's stone ground mustard on the right.


I frankly do not approve of the mustard's involvement, and had to fight the urge to again beat him about the face and neck, but I learned a valuable lesson my friends. To thine own Reuben self be true. A Reuben in the hand is worth two in the bush. Two Reuben's diverged in a yellow wood....I chose the one less traveled by, and that has made all the difference.

Admittedly, I've now lost my way. The valuable lesson is somewhere in there I think. 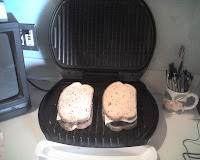 The George Foreman grill was now utilized. Say what you want about Foreman the blowhard, Foreman the Ali impersonator, Foreman the shill for damn near anything, but this bitch can make a grill. Fatless prep. Truth be told, I wish we would have buttered the bread, or perhaps even toasted then buttered then grilled, but hey, it was mach 1. Back off. 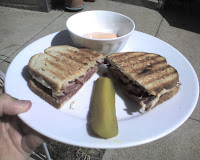 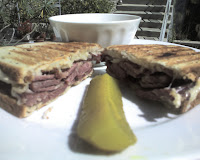 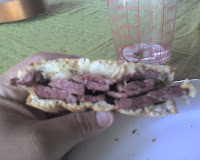 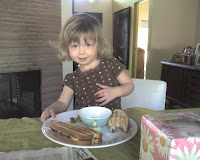 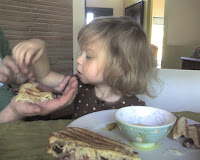 Overall, a solid effort on mach 1, and an afternoon inspiringly spent.

Top o' the mornin' to ya. Does Manischevitz make a stout?
Posted by Reuben R. Reuben at 8:00 AM

Reuben R. Reuben
Los Angeles, CA, United States
I am the Reubenator. What do I do? I Reuben, when allowed. Come, my friends, and Reuben with me. Send me your Reuben stories, locales, and pictures, and the world will know. Email me at reubenrreuben@gmail.com 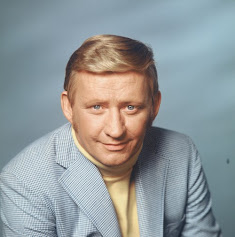 One of the finest human Reubens.

On the heels of the revolutionary Reuben omelette, what is the next crazed Reuben food fad?

Reuben R. Reuben on the radio! 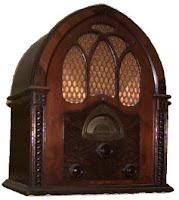 The great Nick DiGilio of WGN-Radio in Chicago is no fool.


He welcomed me to his show to discuss the blog, and the majesty of the world's greatest sandwich.

Listen here to part 1, after a 2 minute discussion on Robin Trower:


The Reubenization has commenced in earnest.